The patch notes for the 1/7 update is here!

In this patch, new content and events have been added to the game. We have also made general improvements and tended to various in-game issues. Let’s take a look at the changes coming to this patch!

※ All screenshots were taken from the test environment and may differ from what appears in the live server.

Higher difficulties have been added. 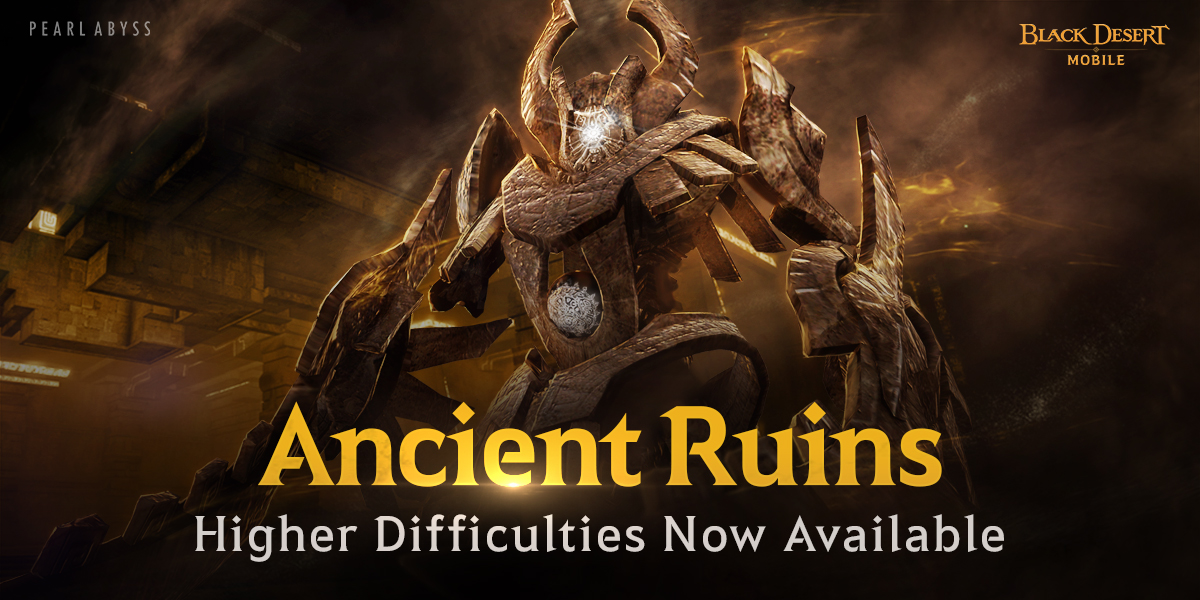 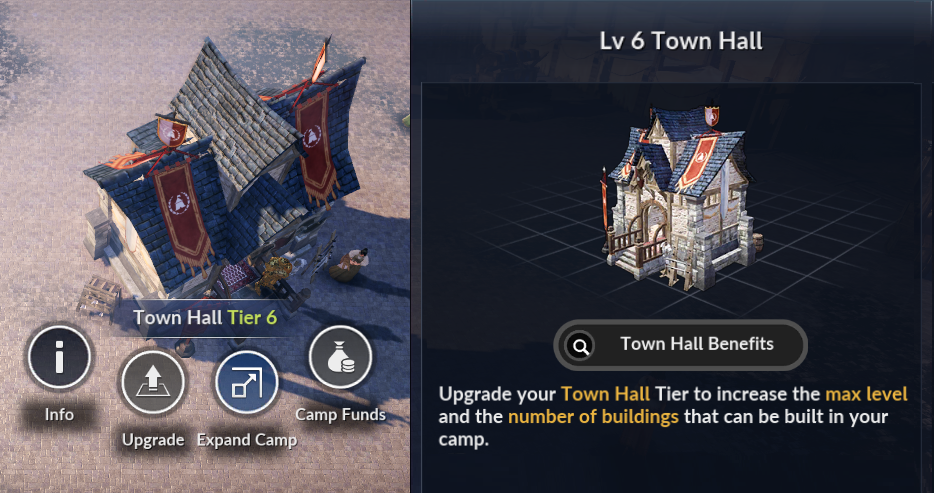 - Tier 6 Town Hall has been unlocked. With the addition of Tier 6, you can further upgrade other buildings as well.

* There is an issue with the patch notes regarding Blacksmith. "Crafting of some Epic Gear and Weapons" was the intention, but it was mistranslated into "Mystical". Originally, this patch was to open Epic grade gear crafting in Blacksmith. However, only Unique grade gear is available even after upgrading the Blacksmith to level 13. This issue is being looked into at the moment. Sorry for the inconvenience. (Updated 1/7 08:03 PST)

- With Town Hall Tier 6 unlocked, the total number of structures that can be built has been increased to 150. 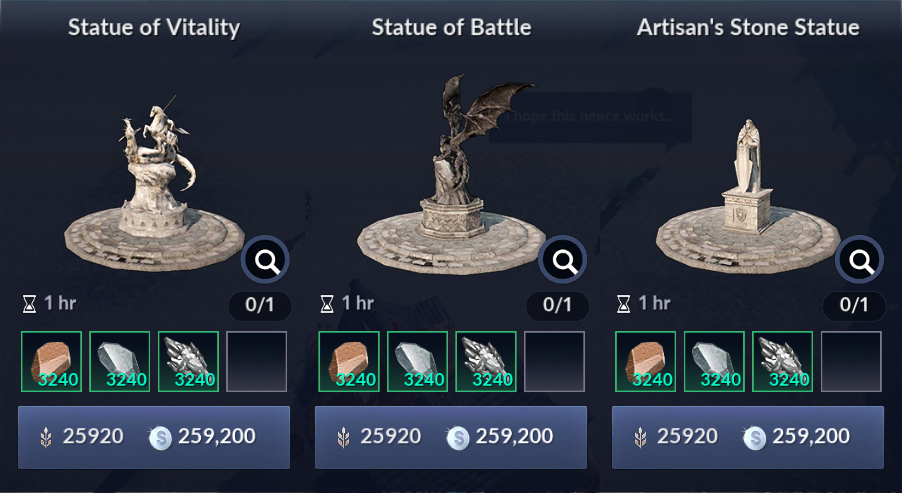 - Now Adventurers can construct up to 3 different monuments.

※ Each monument has different effects and only one monument can be built at a time.

※ The monument in place must be removed before a new monument can be built.

- The randomly generated resources (such as Weed, Mysterious Ore, and Tree Stump) in camp when picked up has a chance to grow into a tree over time. 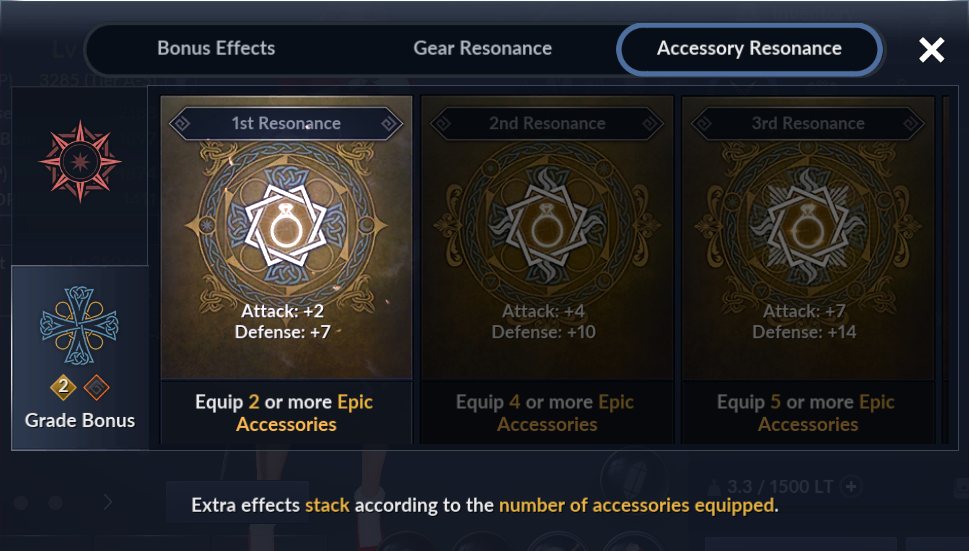 - Additional Accessory Resonance effects have been added depending on the accessory and the total number of accessories equipped.

Guilds can now declare war on another guild. 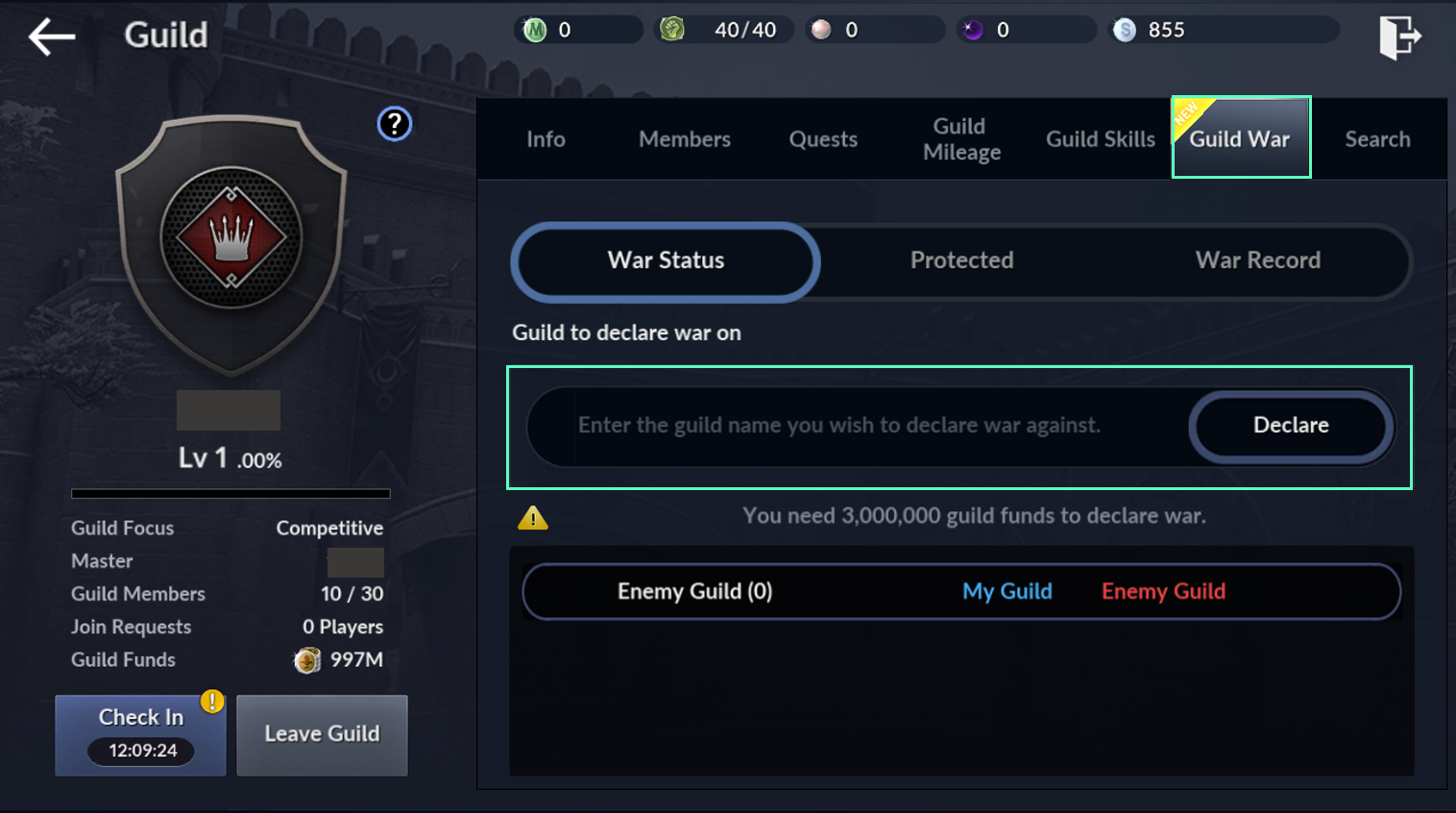 Enter the name of the guild that you wish to go war with and then tap [Declare].

Only Guild Masters and Guild Officers can use the Declare War function and it costs 3,000,000 Guild Funds.

Guild Masters or Officers must enter the guild name that they wish to go war with and [Declare] must be tapped.

※ Each guild can declare war on a maximum of 1 guild at a time. However, the same guild can have war declared on them by up to 10 guilds.

※ After a war with a guild ends, there is a 24 hour waiting period until you may go to war with the same guild again. 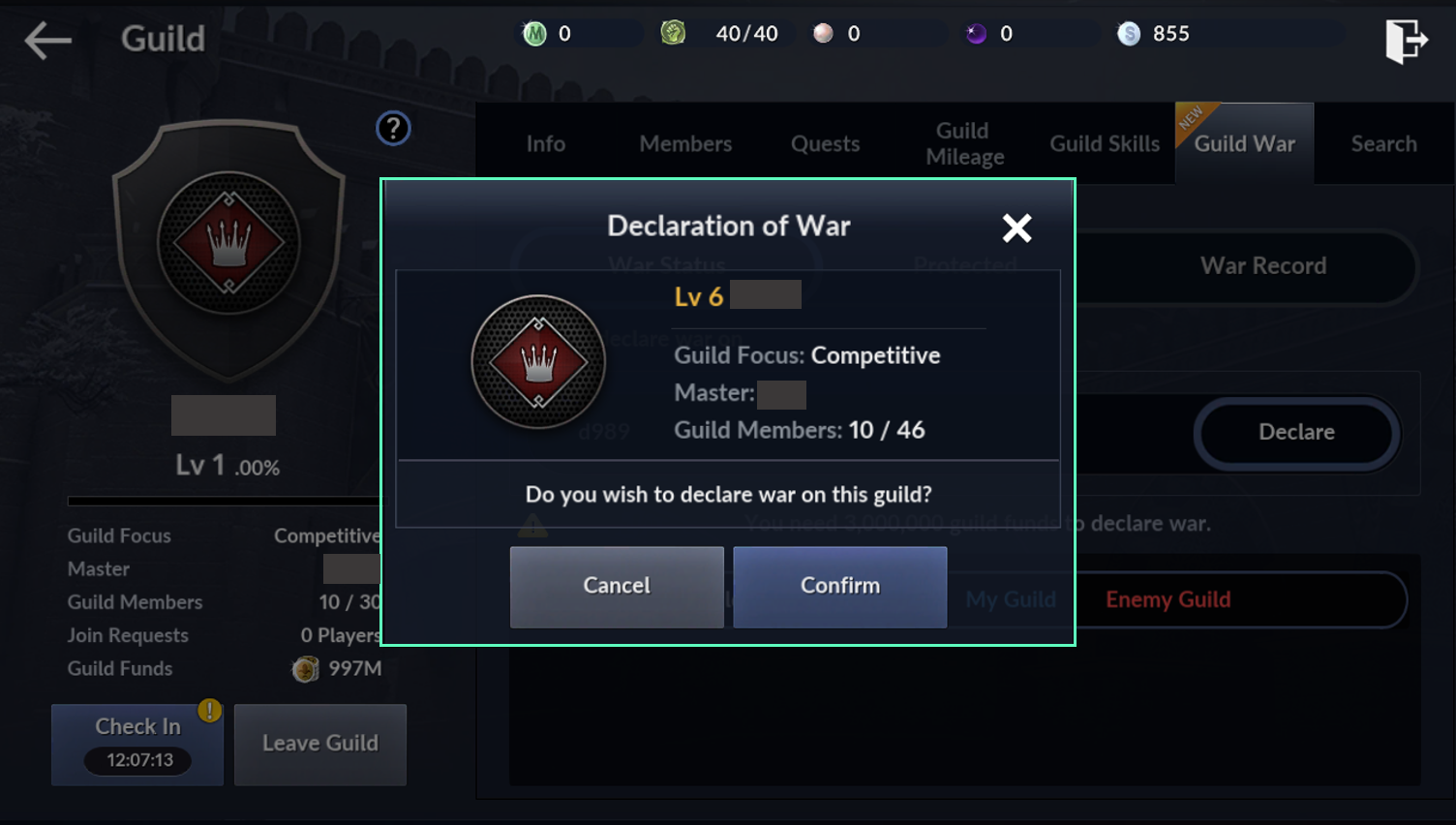 During the war, enemy guild members will be shown with a red mark on the minimap, meaning it is possible to attack them.

Defeating an enemy guild member will grant you guild points based on the defeated Adventurer’s Combat Points.

The first guild to reach 30,000 points wins the guild war, and the war ends. 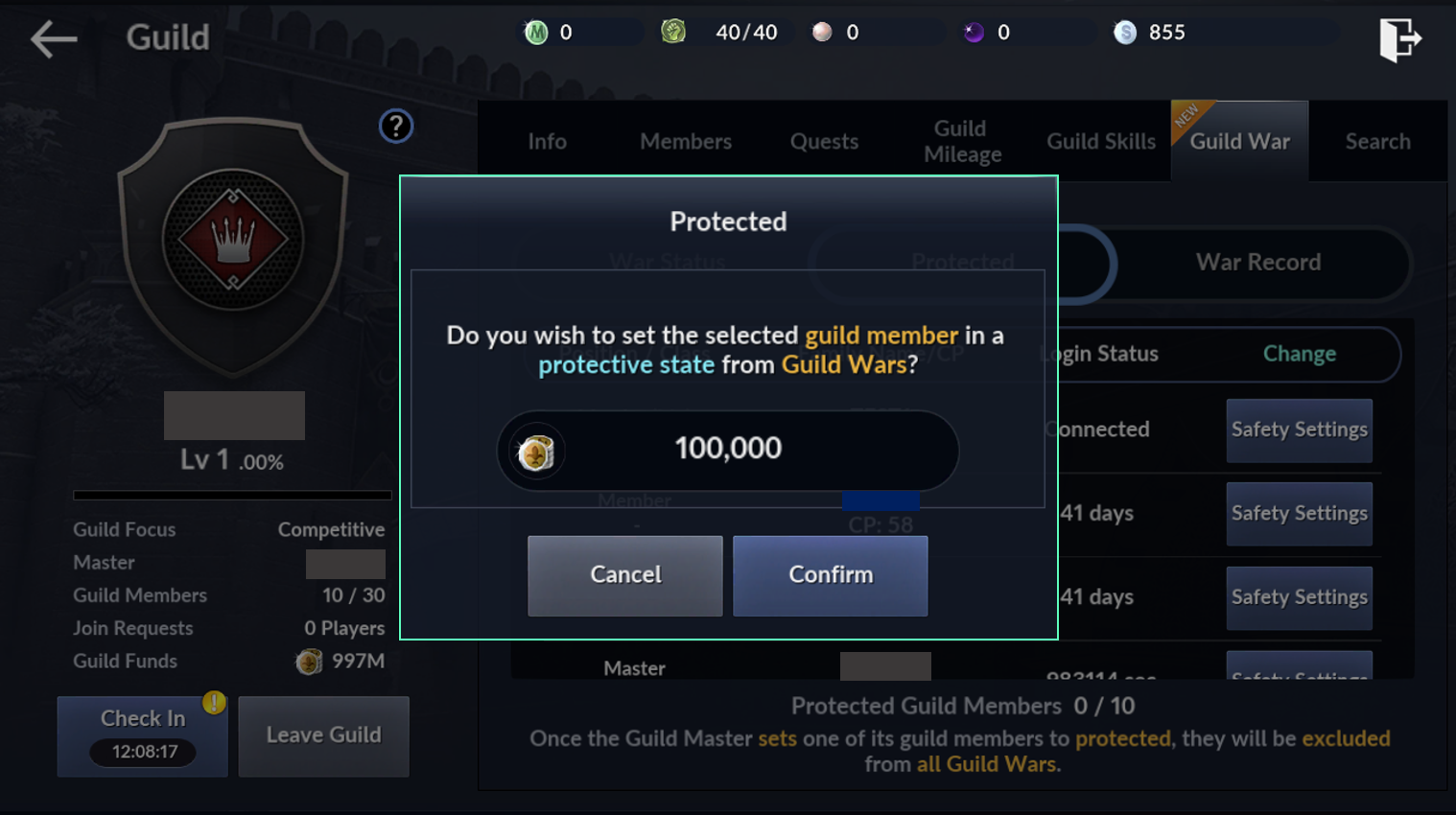 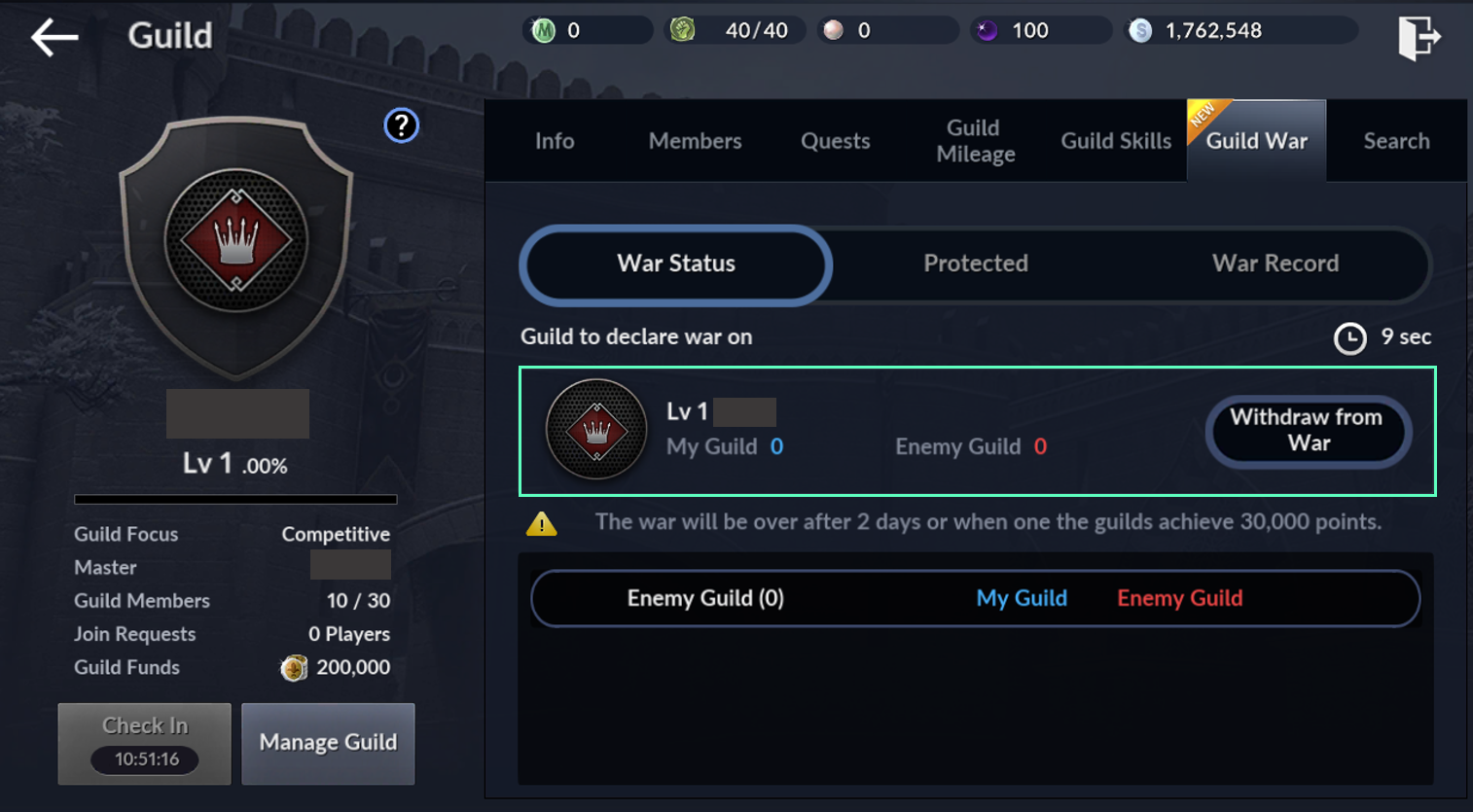 In case a guild wishes to cease a guild war, the Guild Master or Guild Officer may choose to withdraw from the war.

Withdrawing will result in the immediate defeat of the withdrawing guild.

※ Withdrawing is only possible under two conditions:

a) at least 60 minutes have passed or b) the guild point difference is greater than 2,000 points.

※ Defeated guilds cannot have war declared upon them for 24 hours.

- Devices, which are capable of running Black Desert Mobile on max settings, have the option to enable max settings. This system is available on all devices. However, devices with weaker specs will have their graphics settings adjusted in case of overheating or frame drops.

- Adventurers can enter an Adventurer’s Fame code at level 1, but now Adventurers must be level 20 or higher to receive the reward chest. Also, the recommended Adventurer’s fame points will only increase after claiming the reward.

- In-game chat is now divided into languages. Tap the chat to open the chat and at the top, tap languages for options.

- The dummy enemy in the skill tab will now return to its original state faster.

- Quests will now be displayed in an order that prioritizes quests that should be cleared first.

- Fixed an issue where Adventurers who are not part of your party would be shown as a party member on the minimap.

- Fixed an issue where the results of Ramoness would occasionally not show the correct results.

- Fixed an issue where the experience bar shown at the bottom of the screen would be inaccurate.

- Fixed an issue where the Auto-pathing would act abnormally when navigating to an NPC.

- Fixed an issue where registering a single item in a collection would occasionally result in the collection item not showing up properly.

- Fixed an issue where the effects of Enhancement would be wrong when gear or weapons would have existing enhancement success rates.

- Fixed an issue where the text would not align properly when changing back from Select Mode or Info Mode in the Shakatu Exchange page in some languages.

- Fixed an issue where registering Pets immediately after purchasing them would occasionally show Guild Mileage and Mileage, when it should not.

- Fixed an issue where the rewards for Boss Rush Difficulty 99 would occasionally become visible.

- Fixed an issue wherein the names of regions in the Node War map would occasionally look extremely small.

- Fixed an issue where status effects would occasionally persist in Ramoness and Arena.

- Fixed an issue where turning helmets on or off left a shadow on the face of some characters.

- Fixed an issue so that Berni gear will not show up on the Market.

- Fixed a rare issue where, when a weapon outfit is fitted, and the weapon or sub-weapon is unequipped, the base weapon would not be visible anymore.

- Fixed a rare issue where unchecking some of the options in Pearl Shop - Outfits would result in visual errors.

- Some Guild Mileage quests will no longer be available.

■ Sale ending for the following Items